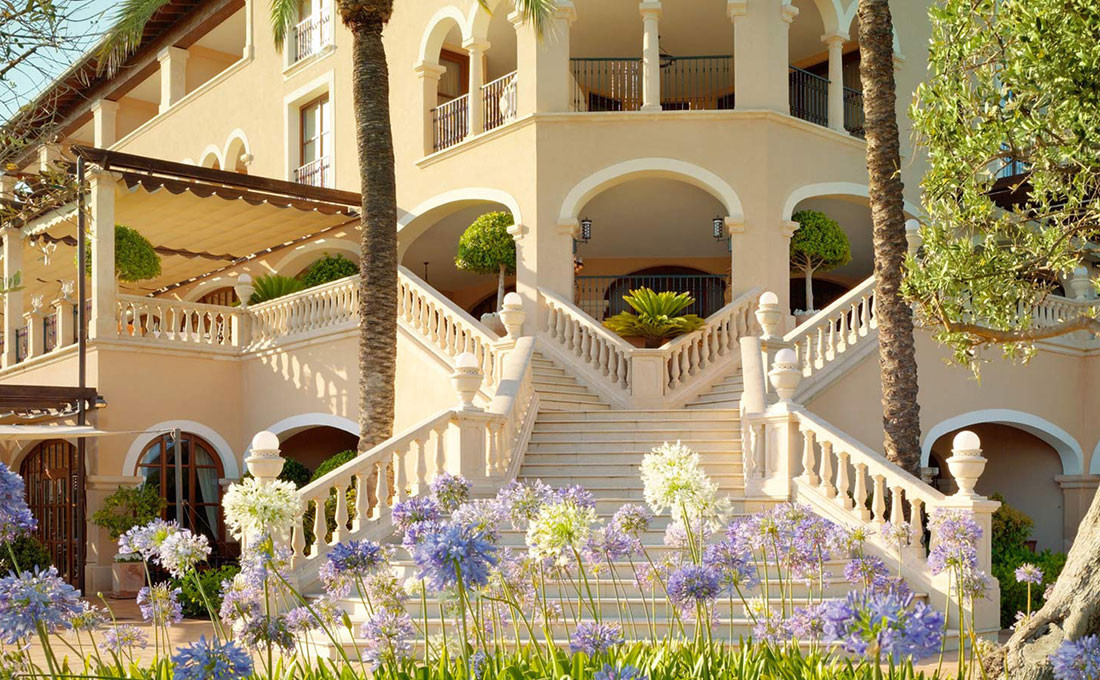 The imposing gates of the St. Regis Mardavall on the beautiful Spanish island of Majorca speak more of a wealthy landowner’s hacienda than a luxury hotel, but that’s the key to the charm of this lovely hotel, which sits just outside of the island’s capital, Palma.

Framed by the Tramuntana Mountains, the luxurious marina of Puerto Portals and the Mediterranean Sea, the St. Regis Mardavall neatly avoids the hustle and bustle of the biggest population centre on Mallorca, as well as the hordes of tourists that descend on the island over the summer months. Majorca has an unfair image of a package tour magnet, full of English and German tourists, keen to avoid leaving their home country comforts.

And just like any holiday destination, there is an element of that if you choose the wrong location. But Majorca has much more to it than just package beach holidays. Outside of peak season the island is a magnet for cyclists, with many of the world’s top teams using its undulating roads as the perfect training ground for the famous tours of the cycling world.

Look carefully and you’ll often spot the famous cycling faces from TV screens across the world stopping for a breather at the side of a particularly scenic coastal road. Despite looking distinctly colonial the hotel itself was actually only constructed in 2002, as the spa and wellness resort, part of the Luxury Collection from Starwood.

In 2008 it underwent a rebranding process and changed to the St. Regis brand. During the rebranding the whole hotel (both inside and outside) went through a 3 million Euro refurbishment, designed by the famed Claudio Carbone whose use of colour to create different atmospheres can clearly be seen throughout the property. The hotel has seven room options, starting with the 48-metre square Grand Deluxe Room, which overlooks the hotel’s beautifully landscaped gardens from a lavishly equipped private terrace. The rooms all feature 40-inch, high resolution flat screen TVs, stunning bathrooms and soft furnishings.

It’s all very much keeping with the hotel’s high-end decor found in the public spaces. You can then work your way up via family rooms, and sea view rooms to the Mardavall Diamond Suite, which features 117 square metres of magnificent décor and hand-made furniture. This spacious one-bedroom suite comes with a 38 square metre outdoor terrace, featuring a private Jacuzzi overlooking the Mediterranean Sea. It also includes a butler from the hotel’s St. Regis butler service.

Spa lovers can pamper themselves at the hotel’s Arabella spa. At 4,700 m² it’s one of Europe’s biggest spa facilities. The spa uses Niance treatments from Switzerland, who specialise in developing luxury anti-aging skin-care products. For culinary fans, the St. Regis doesn’t disappoint. The star of the show is Es Fum, the hotel’s Michelin Star restaurant. Guests can sample the delights of Chef Rafael Sánchez and his delightfully innovative creations. Diners can choose an inside seat or one on the terrace, with stunning views of the Mediterranean Sea.

For less formal dining there’s Aqua, the elegant, Majorcan/Mediterraneanstyle restaurant with extensive views of the hotel’s beautiful gardens. The menu focuses on Spanish and Italian dishes, and serves through breakfast and lunch to dinner. Further small bites are available by the pool at Sa Bidia. The bar sits directly by the large outdoor swimming pool in an easy, relaxed atmosphere. Away from the food, there’s the Es Vent lobby bar, which is anything but a lobby bar. In many hotels the lobby bar is often a bit of an afterthought, but not so at the St. Regis. Es Vent has a strong colonial feel to it and is the perfect place to relax. In fact, the only thing that makes it a ‘lobby bar’ is the fact it’s in the lobby. For cigar connoisseurs Churchill’s Lounge offers an exclusive selection of the world’s best cigars, as well as a wide range of digestives and more than100 different whiskeys. The private, almost intimate lounge, has a pool table and soft leather furnishings to set the correct tone.

The only downside is that, due to European regulations, smoking is only permitted outdoors. The St. Regis neatly blends old-school colonial style in a modern build. Often newly built hotels are simply a parody of the era they are trying to emulate. But the St. Regis has been built carefully and with thought. The rooms are simply stunning, even at entry level, with beautiful furnishings and all the amenities you’d expect from a modern, luxury hotel.

But it’s also quaint, elegant and importantly Spanish. Majorca may not be on your list as a luxury traveler, but it should be. Just like all of Spain, it has its package deal areas, but it also has plenty of luxury offers. If that’s what you’re after, then the St. Regis Mardavall is one of the best.